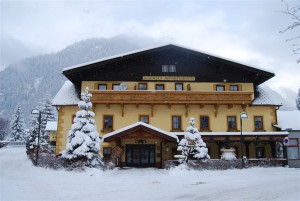 The ensemble Drei Gemsen is part of the oldest buildings in Mallnitz, dating back to the time of the transmountain trading, which has been very popular during the 12th and 13th centuries. The house served as shelter for the night, when the weather conditions on the mountain trails did not allow travelers to cross the Hohe Tauern region. Later, from the mid 19th century on, the inn was joined by a post office.

During a hunting trip into the mountains of Mallnitz, one of the previous owners shot down 3 black goats with one single shot. Hence the name of the former inn.

3 Gemsen is located in the center of the village and meets the austrian standards of a three star hotel. In addition to the range of Edelweiss Group’s offerings, guests of this rustic house have the exclusive right to practice fishing in Mallnitz’ two rivers the Tauernbach and the Seebach.

The starting point for mountain roads and trails is directly in front of the hotel. For routs higher than 1600m you are invited to hop on a bus, which too, stops right in front of our hotel. For cross-country ski lovers, the tracks start right by the hotel – with guests having both skiing and cross-country skiing schools available right in the village center (aprox. 500m). During winter time, the bus (free around town) to the Ankogel slopes and the Mölltaler glacier in the neighboring village Flattach stops practically in front of the house.

This website uses cookies to improve your experience. We'll assume you're ok with this, but you can opt-out if you wish.Accept

This website uses cookies to improve your experience while you navigate through the website. Out of these, the cookies that are categorized as necessary are stored on your browser as they are essential for the working of basic functionalities of the website. We also use third-party cookies that help us analyze and understand how you use this website. These cookies will be stored in your browser only with your consent. You also have the option to opt-out of these cookies. But opting out of some of these cookies may affect your browsing experience.
Necessary Always Enabled

Any cookies that may not be particularly necessary for the website to function and is used specifically to collect user personal data via analytics, ads, other embedded contents are termed as non-necessary cookies. It is mandatory to procure user consent prior to running these cookies on your website.