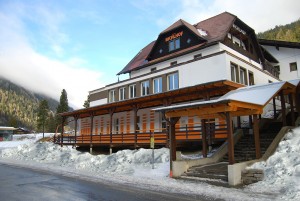 Bichlhof is a hotel that dates back to the founding of the resort Mallnitz. It was built during the era of the european railway construction in the early twentieth century for the “Jet Set” of the “Rolling Twenties.” In the early ’70s, the hotel becomes a popular place for school groups, mainly from Great Britain and Austria.

Today, the hotel is completely renovated and is still hosting mainly young visitors, school groups and athletes. Bichlhof hotel is located centrally and meets the austrian standards of a three star hotel.

Nordic walking and hiking trails, as well as cross-country tracks start directly by the hotel. During winter time, the bus (free around town) to the Ankogel slopes and the Mölltaler glacier in the neighboring village Flattach stops practically in front of the house.

The hotel was fully redecorated and refurbished in 2010-2011 and it offers its guests several dining rooms  and a comfortable lobby. In addition, it offers a fitness room and a wellness-area with steam sauna. There is also the hotel’s “Gameland” and the disco to entertain guests. There is free access to wireless internet connection in the entire building. The hotel also offers a heated ski room and a parking lot with video surveillance.

The rooms are newly-furnished in rustic style. There are rooms with bunk beds for 2, 4, 6, 8 or 10 persons. There is a bathroom with toilet, a mini fridge, as well as TFT-LCD in every room. Most rooms also have a balcony.

This website uses cookies to improve your experience. We'll assume you're ok with this, but you can opt-out if you wish.Accept

This website uses cookies to improve your experience while you navigate through the website. Out of these, the cookies that are categorized as necessary are stored on your browser as they are essential for the working of basic functionalities of the website. We also use third-party cookies that help us analyze and understand how you use this website. These cookies will be stored in your browser only with your consent. You also have the option to opt-out of these cookies. But opting out of some of these cookies may affect your browsing experience.
Necessary Always Enabled

Any cookies that may not be particularly necessary for the website to function and is used specifically to collect user personal data via analytics, ads, other embedded contents are termed as non-necessary cookies. It is mandatory to procure user consent prior to running these cookies on your website.